Do you have an older Player-S?

Scala's Player-S has been periodically updated over the years with new hardware. To verify which Player-S you have, check the label that is on the player. This section addresses the latest version of the Player-S, the R1305G model. If you have a B409 model, refer to Scala Media Player-S (B409 Discontinued). If you have a B363 model, that player is no longer supported.

The player has an AMD Ryzen R1000-series APU running the Windows® Operating System with the Scala Enterprise Windows-based digital signage playback engine. It supports 3D-graphics compositing and hardware accelerated video playback. The player is passively cooled with no fans or blowers.

As a dedicated digital signage player, the Player-S incorporates software-based EDID Emulation (EDID Override) as well as Display Continuity. These features help stabilize playback recovery in any cases where the screen becomes disconnected from the player. 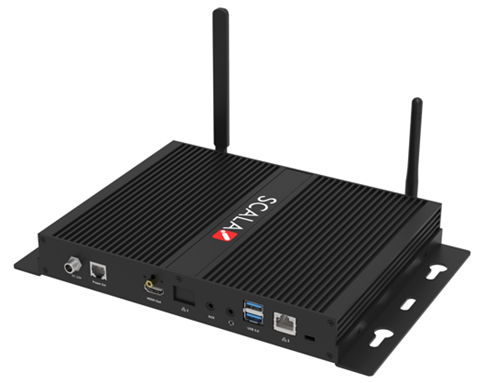 The operating system has minor customizations implemented by Scala to optimize performance.

The Player-S pairs best with a single-channel Advanced UHD license, which supports ultra HD/4K resolution and access to all advanced features.

While you can use a Standard HD or Lite license with the Player-S, neither support ultra HD/4K resolutions and they do not provide as many features as an Advanced UHD license. For details about the different licenses, refer to the License Functionality Matrix.

With only one HDMI video output, the Player-S should be paired only with single-channel licenses.

First, refer to Setting Up the Player-S (R1305G) for information about setting up the hardware and cables.

Then, to configure the player so that you can begin using it for playback, refer to the Windows Player Setup Checklist.

Refer to Warranty and Support.